Introduction to R and RStudio

Science is a multi-step process: once you’ve designed an experiment and collected data, the real fun begins! This lesson will teach you how to start this process using R and RStudio. We will begin with raw data, perform exploratory analyses, and learn how to plot results graphically. This example starts with a dataset from gapminder.org containing population information for many countries through time. Can you read the data into R? Can you plot the population for Senegal? Can you calculate the average income for countries on the continent of Asia? By the end of these lessons you will be able to do things like plot the populations for all of these countries in under a minute!

Before Starting The Workshop

Please ensure you have the latest version of R and RStudio installed on your machine. This is important, as some packages used in the workshop may not install correctly (or at all) if R is not up to date.

Download and install the latest version of R here

Welcome to the R portion of the Software Carpentry workshop.

Throughout this lesson, we’re going to teach you some of the fundamentals of the R language as well as some best practices for organizing code for scientific projects that will make your life easier.

We’ll be using RStudio: a free, open source R integrated development environment. It provides a built in editor, works on all platforms (including on servers) and provides many advantages such as integration with version control and project management.

When you first open RStudio, you will be greeted by three panels: 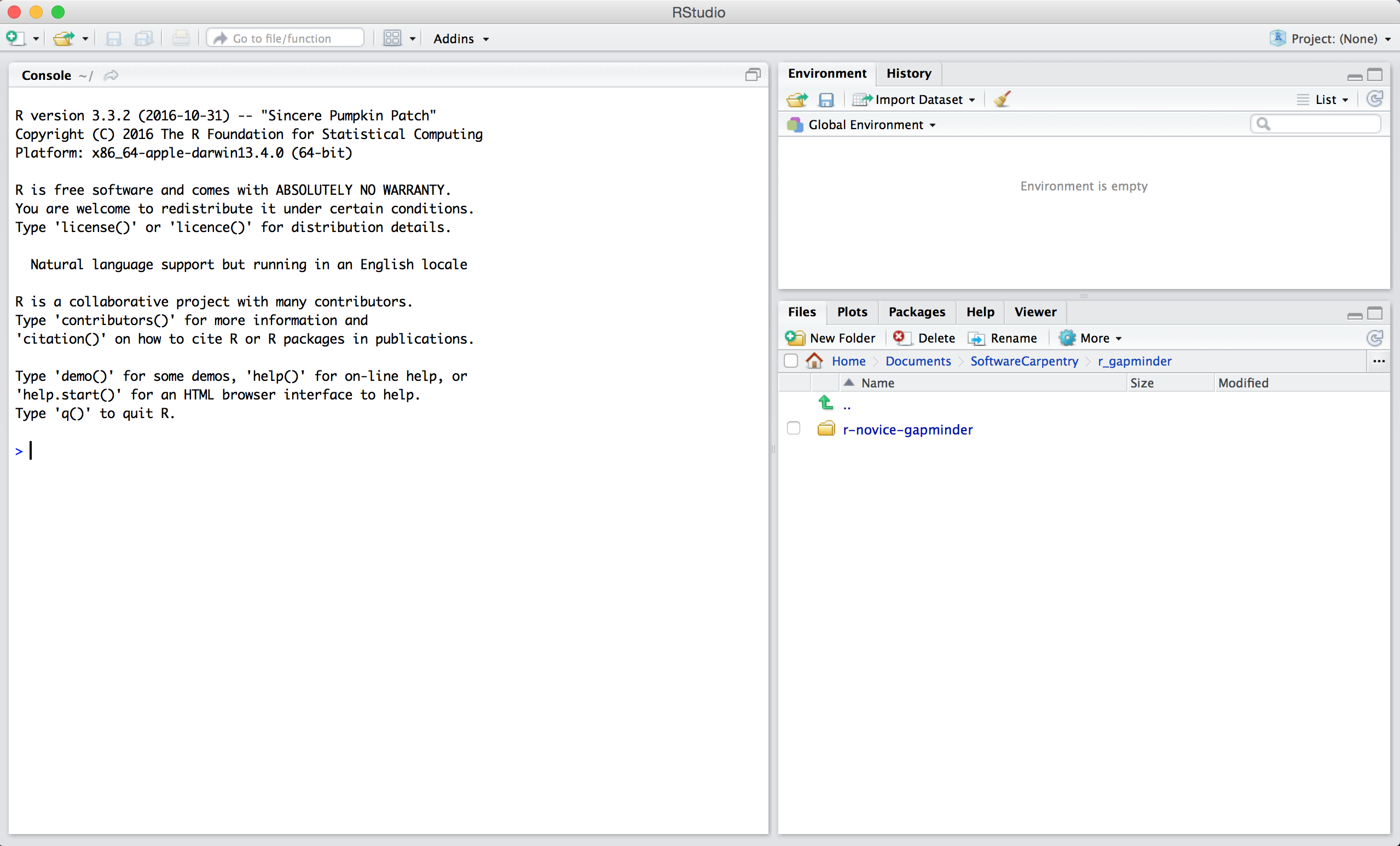 Once you open files, such as R scripts, an editor panel will also open in the top left. 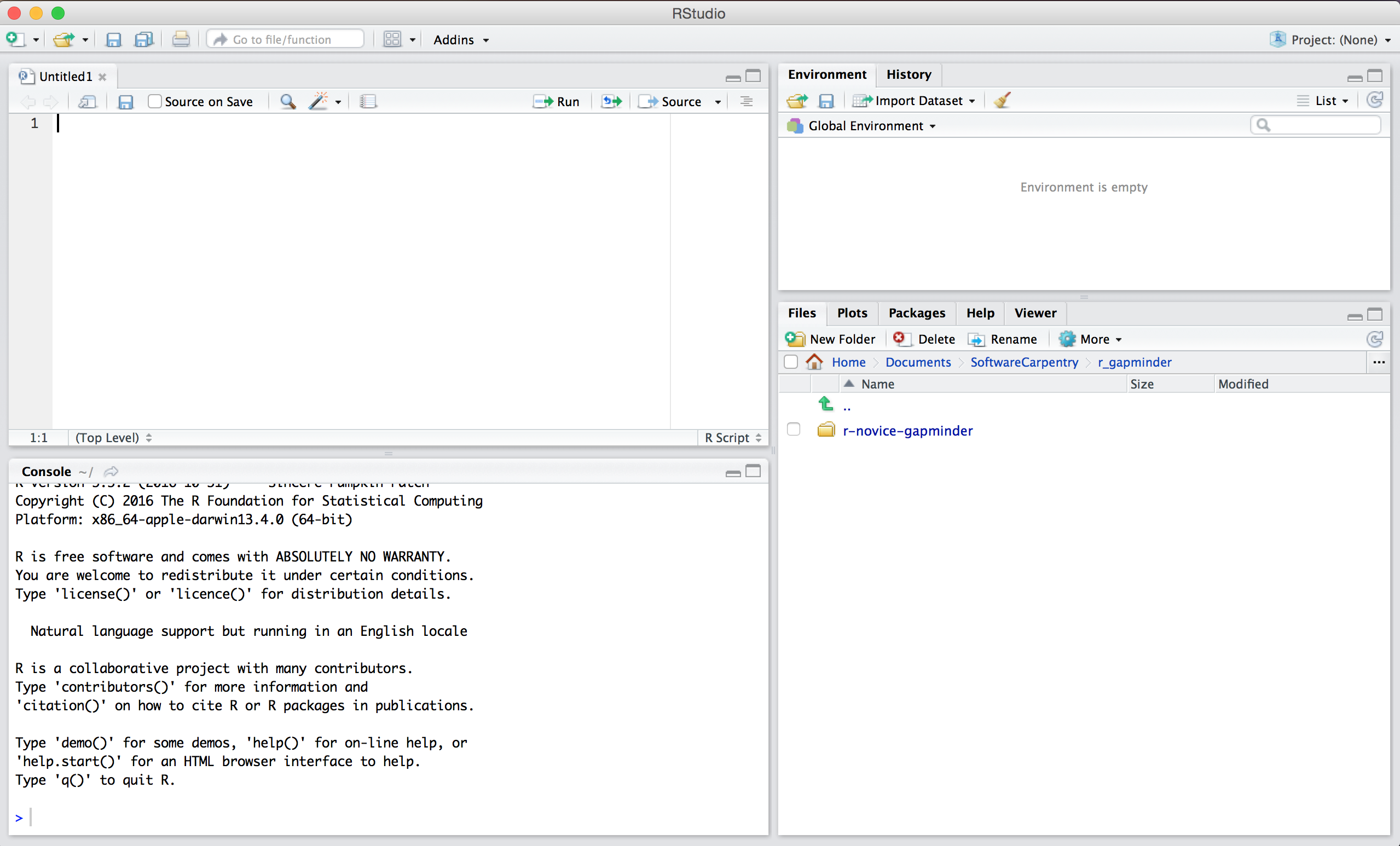 There are two main ways one can work within RStudio.

Tip: Running segments of your code

RStudio offers you great flexibility in running code from within the editor window. There are buttons, menu choices, and keyboard shortcuts. To run the current line, you can 1. click on the Run button above the editor panel, or 2. select “Run Lines” from the “Code” menu, or 3. hit Ctrl-Enter in Windows or Linux or Command-Enter on OS X. (This shortcut can also be seen by hovering the mouse over the button). To run a block of code, select it and then Run. If you have modified a line of code within a block of code you have just run, there is no need to re-select the section and Run, you can use the next button along, Re-run the previous region. This will run the previous code block including the modifications you have made.

Much of your time in R will be spent in the R interactive console. This is where you will run all of your code, and can be a useful environment to try out ideas before adding them to an R script file. This console in RStudio is the same as the one you would get if you typed in R in your command-line environment.

The first thing you will see in the R interactive session is a bunch of information, followed by a “>” and a blinking cursor. It operates on the idea of a “Read, evaluate, print loop”: you type in commands, R tries to execute them, and then returns a result.

Using R as a calculator

The simplest thing you could do with R is do arithmetic:

And R will print out the answer, with a preceding “[1]”. Don’t worry about this for now, we’ll explain that later. For now think of it as indicating output.

Like bash, if you type in an incomplete command, R will wait for you to complete it:

Any time you hit return and the R session shows a “+” instead of a “>”, it means it’s waiting for you to complete the command. If you want to cancel a command you can simply hit “Esc” and RStudio will give you back the “>” prompt.

If you’re using R from the command-line instead of from within RStudio, you need to use Ctrl+C instead of Esc to cancel the command. This applies to Mac users as well!

Canceling a command isn’t only useful for killing incomplete commands: you can also use it to tell R to stop running code (for example if it’s taking much longer than you expect), or to get rid of the code you’re currently writing.

When using R as a calculator, the order of operations is the same as you would have learned back in school.

From highest to lowest precedence:

Use parentheses to group operations in order to force the order of evaluation if it differs from the default, or to make clear what you intend.

This can get unwieldy when not needed, but clarifies your intentions. Remember that others may later read your code.

The text after each line of code is called a “comment”. Anything that follows after the hash (or octothorpe) symbol # is ignored by R when it executes code.

Really small or large numbers get a scientific notation:

You can write numbers in scientific notation too:

R has many built in mathematical functions. To call a function, we simply type its name, followed by open and closing parentheses. Anything we type inside the parentheses is called the function’s arguments:

Don’t worry about trying to remember every function in R. You can simply look them up on Google, or if you can remember the start of the function’s name, use the tab completion in RStudio.

This is one advantage that RStudio has over R on its own, it has auto-completion abilities that allow you to more easily look up functions, their arguments, and the values that they take.

Typing a ? before the name of a command will open the help page for that command. As well as providing a detailed description of the command and how it works, scrolling to the bottom of the help page will usually show a collection of code examples which illustrate command usage. We’ll go through an example later.

We can also do comparison in R:

A word of warning about comparing numbers: you should never use == to compare two numbers unless they are integers (a data type which can specifically represent only whole numbers).

Computers may only represent decimal numbers with a certain degree of precision, so two numbers which look the same when printed out by R, may actually have different underlying representations and therefore be different by a small margin of error (called Machine numeric tolerance).

Instead you should use the all.equal function.

We can store values in variables using the assignment operator <-, like this:

Notice that assignment does not print a value. Instead, we stored it for later in something called a variable. x now contains the value 0.025:

More precisely, the stored value is a decimal approximation of this fraction called a floating point number.

Look for the Environment tab in one of the panes of RStudio, and you will see that x and its value have appeared. Our variable x can be used in place of a number in any calculation that expects a number:

Notice also that variables can be reassigned:

Assignment values can contain the variable being assigned to:

Variable names can contain letters, numbers, underscores and periods. They cannot start with a number nor contain spaces at all. Different people use different conventions for long variable names, these include

What you use is up to you, but be consistent.

It is also possible to use the = operator for assignment:

But this is much less common among R users. The most important thing is to be consistent with the operator you use. There are occasionally places where it is less confusing to use <- than =, and it is the most common symbol used in the community. So the recommendation is to use <-.

One final thing to be aware of is that R is vectorized, meaning that variables and functions can have vectors as values. For example

This is incredibly powerful; we will discuss this further in an upcoming lesson.

There are a few useful commands you can use to interact with the R session.

ls will list all of the variables and functions stored in the global environment (your working R session):

Like in the shell, ls will hide any variables or functions starting with a “.” by default. To list all objects, type ls(all.names=TRUE) instead

Note here that we didn’t give any arguments to ls, but we still needed to give the parentheses to tell R to call the function.

If we type ls by itself, R will print out the source code for that function!

You can use rm to delete objects you no longer need:

If you have lots of things in your environment and want to delete all of them, you can pass the results of ls to the rm function:

In this case we’ve combined the two. Like the order of operations, anything inside the innermost parentheses is evaluated first, and so on.

In this case we’ve specified that the results of ls should be used for the list argument in rm. When assigning values to arguments by name, you must use the = operator!!

If instead we use <-, there will be unintended side effects, or you may get an error message:

Pay attention when R does something unexpected! Errors, like above, are thrown when R cannot proceed with a calculation. Warnings on the other hand usually mean that the function has run, but it probably hasn’t worked as expected.

In both cases, the message that R prints out usually give you clues how to fix a problem.

It is possible to add functions to R by writing a package, or by obtaining a package written by someone else. As of this writing, there are over 10,000 packages available on CRAN (the comprehensive R archive network). R and RStudio have functionality for managing packages:

Which of the following are valid R variable names?

The following can be used as R variables:

The following creates a hidden variable:

What will be the value of each variable after each statement in the following program?

This will give a value of 47.5 for the variable mass

This will give a value of 122 for the variable age

This will subtract 20 from the existing value of 122 to give a new value of 102 to the variable age.

Run the code from the previous challenge, and write a command to compare mass to age. Is mass larger than age?

One way of answering this question in R is to use the > to set up the following:

Clean up your working environment by deleting the mass and age variables.

We can use the rm command to accomplish this task

We can use the install.packages() command to install the required packages.